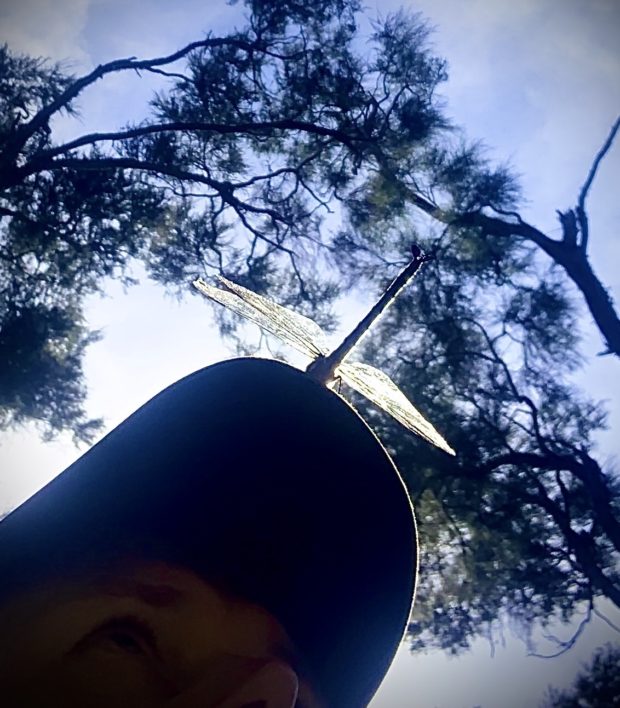 The return of remembering

Special moments can transpire in the wilds: this one involved a dragonfly, a prolonged thought of invitation and a ritualised solo fast in the mountains.

Since publishing my PhD dissertation in 2014, I am generally reluctant to share details of intimate stories with nature. However, since this particular encounter builds on a pivotal experience in my life – and one recounted in my dissertation and online – I feel readers may find value in this story, particularly how synchronicity can gain significance as a series of events connected both in meaning and circumstance.

It was early January 2019 and I felt a calling to get away to find some solitude and quietude in deeper nature, in order to find clarity and direction for the year ahead.

I was staying with family in New Zealand and decided to venture up into a native forest region called the Kawekas, through which flows the mighty Mohaka River, considered sacred to the local Iwi (Māori peoples). I have found from experience that such solo sojourns are far more powerful when I create some kind of intention around my purpose for going and employ ways to focus my attention. On this occasion, I chose to fast (abstain from food) for the three nights I would be away.

On the second morning, as I hiked deeper into the region, I came to a part of the trail where the forest canopy opened up and the sun bathed the green undergrowth. I noticed to my left, about 10 metres ahead, a large black dragonfly – possibly the largest I had ever seen alive with my own eyes.  As it whirred about with it’s staccato and seemingly erratic changes of direction, my mind cast back to my most powerful dragonfly encounter where dragonflies landed on me. And then I thought about the only other time that had subsequently happened [1], which was in South Africa while I was doing a similar journey – a multi-day solo fast into the mountains.

And so I paused, reminiscing on those memories  – and the quirky possibility that this dragonfly might too also find appeal in coming to land on me. I even mentally voice a kind of invitation, almost like a jokingly “How about it?” In those seconds immediately after, the dragonfly veered left and flew directly toward me … and before I could process what was happening it was on my hat. I was awestruck.

After breathing in the moment for some time and appreciating this sublime gift, I tentatively pulled out my camera to capture a photo. And I did. And the dragonfly didn’t move.  And another – closer. And it stayed there. And so it went on. One time it seemed I did venture too close with a macro attempt and the dragonfly took flight. I cursed my disrespectful clumsiness and began to walk, only to hear (this insect was loud) it return back onto my hat within seconds. And there it stayed. We must have been together almost 10 minutes. Eventually, I felt I needed to walk to move out of the sun. And still it stayed, fixed on my hat, until I reached the shadows under the canopy where eventually it took flight.

Buoyant and with renewed aliveness for the mystery and Tricksters of the world, I walked on in silence ruminating about this experience. What just happened there? What precipitated that to happen? What was it about my state of being that permitted such an encounter? What are the odds of this encounter mirroring the ritualised conditions of my previous dragonfly landing seven years earlier? Was there a personal message in this or was it better left as a pure moment of shared awareness?   I let these questions percolate with the rhythm of my walking.

Learning one’s place through attention to animals is not solely a matter of being open to ‘statements’ they make about physical, chemical, and biological realms we share. A more profound communication can take place. In this second sphere, animals have volition; they have intention and the power of influence; and they have the capacity to intervene in our lives. I’ve never known people who were entirely comfortable addressing such things. ~ (Barry Lopez 2003)

Three days passed and, richly nourished by all manner of special gifts and insights from wild nature during that time, I was now making my back down the gorge to return to ‘everyday life’.

The day was warming up rapidly and I was proceeding quite quickly in order to avoid the summer heat that was to come. But then, sooner than I had expected, I came to this clearing again.  I slowed, smiled and thought back to my dragonfly companion.

I challenged myself and nature, “It couldn’t happen again, could it?”

Within seconds this majestic dragonfly came out of nowhere and landed on my hat.

It felt like a numinous ‘nod’ from the universe, as if this was the threshold point where the elder ancestor had sent me off and was now welcoming me back form the journey, and perhaps back into community with all life.

There was a sense of deep completion here that was beyond cathartic. It was an invitation to reembody the animate again and to feel that every fibre of my being  – thoughts, emotions, consciousness – are woven into the deep and mysterious soul of the life-world.

[1] As retold in Zylstra (2015). Cave & The Contemplator . On that occasion, as I was emerging from a three-day mountain fast, the sight of dragonflies prompted me to engage in an internal debate with an imagined scientific sceptic about the legitimacy of my first dragonfly encounter.  As my inner talk and self-doubt culminated, a dragonfly landed on the brim of my hat.