The inquisitiveness of youth

It is early autumn on Keurbooms estuary in Plettenberg Bay, South Africa. At any time of year here, you will notice the many kelp gulls flying overheard, congregating on intertidal sandbanks or roosting in the dunes. As common residents, this area is an important breeding colony for them.

What one especially notices at this time of year is the abundance of juvenile gulls.  They are obvious because their plumage is distinctly different: darker, more mottled, browner than the contrasting black and white feathers and yellow bill with red spot defining their adult parents.

Even if these immature gulls were not still wearing their baby clothes, something else gives their age away: their behaviour.  Gulls in general are considered gregarious but these juveniles are particularly extroverted. They are intent on exploring, curiously finding their way in the world and trying out various foraging patterns, often with some comical failures.

It is not unusual for an immature gull to approach a human. And recently whilst doing some stretching on the beach, I was amused by their blatant inquisitiveness toward me. It got me thinking back to my research on meaningful nature experiences (MNEs). One of the themes to emerge was that a MNE may involve – or is perhaps even more likely to occur – with juveniles or sub-adults of a particular species.

This finding was based on what research respondents reported, so it relied on them actually noting they were interacting with a juvenile and then feeling it worthy of recalling as part of their MNE.  But my own experiences and other anecdotal evidence seems to nevertheless confirm this commonality.

Whilst musing at these sociable gulls, I thought back to the many other MNEs I had heard or seen over the years. There was Craig’s stunning encounter with a sub-adult otter, Trevor’s swim with a playful whale calf and the many seal pups that frolic with swimmers off Robberg peninsula. There was also the jaw-dropping encounter with a sub-adult rhino and the image at the top of this page is of a juvenile bottlenose dolphin approaching a colleague’s research boat – each was studying the other. I remember a local surfer from Plettenberg Bay telling me that it was not the large four metre great white sharks that unnerved him, but rather the presence of smaller sub-adults – the impulsive teenagers that were more likely to ‘have a go’ as they explored what was edible and asserted their presence in the area. Two months later, a surfer in the area died from a fatal bite by a young two metre great white. 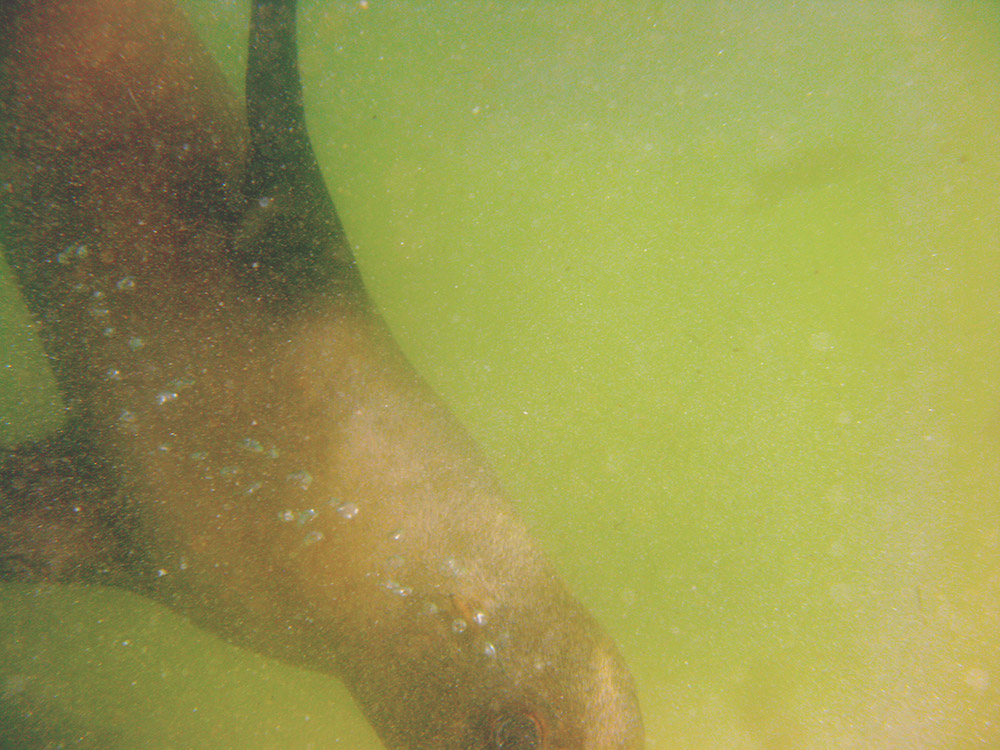 It may hardly seem like a revelation that juveniles are more curious and therefore more likely to check out the newfound things around them, such as humans. But still, it may require us to make a cognitive shift in terms of accepting that animals have a more complex consciousness than we have historically attributed to them. For example, it suggests that the adults of these species actually display a degree of conscious discernment. As for the sub-adults who defined these person’s MNEs, can we accept that they were not merely searching for food, but that their interactions contained another quality – a trait of intense and playful inquisitiveness that reminds us of our own lost childhood curiosity? In this interaction, we find relatedness, connection and, possibly, a desire to include more playful wonder in our own lives.

Even if juvenile animals do not approach us, there is something about youthful antics that we find endearing. I will always remember watching elephants in Addo National Park and, with a car full of other tourists alongside, finding much amusement and delight in the baby elephant that was captivated by the concept of its trunk. For at least ten minutes, this cute pachyderm twirled and twirled its little trunk, in one direction and then another, as if it were a mini helicopter or, alternatively, a pendulum for divination.

Naturally, adult animals are also inquisitive toward humans -– their wild survival instincts demand it. And many counter examples could be found to show that wild adult animals display such curiosity but this naturally depends on their previous levels of exposure to humans or relative levels of habituation. Yet interestingly, the display of an adult’s curiosity seemingly has a different quality to it. In some of the stories I recorded of MNEs involving young animals, the adults were present, and watchful, but less interested. When Trevor began swimming with the playful whale calf, he said that the mother opened her big eyes and stared at him before closing them again and going back to ‘sleep’.

Whether human or animal, there appears to be a logical trend that the freshness or exuberance for life wanes as time wears on. We quickly adapt and get ‘used to’ new situations. As humans, we regularly find ourselves on a ‘hedonic treadmill’ of constantly trying to find satisfying novelty in our lives.

As for the animals, I have sometimes pondered why they lose interest in humans. On occasions when I sit alone in nature and allow my imagination to run wild, I wonder what the watchful adults communicate to their children with their innocent displays. How often do they scold them for recklessly exploring or tell their offspring not to bother with trying to interact with humans? Is that a tiresome look that the adult gull is giving me? Is the stare from the male kangaroo one of cautious reservation or relative disdain? Or did that female antelope bound off in frustration because I fail to understand her or her needs? I find myself wondering if humanity’s own lack of interest or forgotten ways of interrelating with our wild animal kin has affected their learned behaviours as we co-inhabit or, rather, increasingly dominate, their natural spaces.

I snap out of my mental wanderings and return my gaze to these juvenile kelp gulls standing patiently in front me. For now, I have the distinct sense that these two siblings will simply lose interest when they realize that those humans with fishing rods further along the estuary have far more to offer them than I.