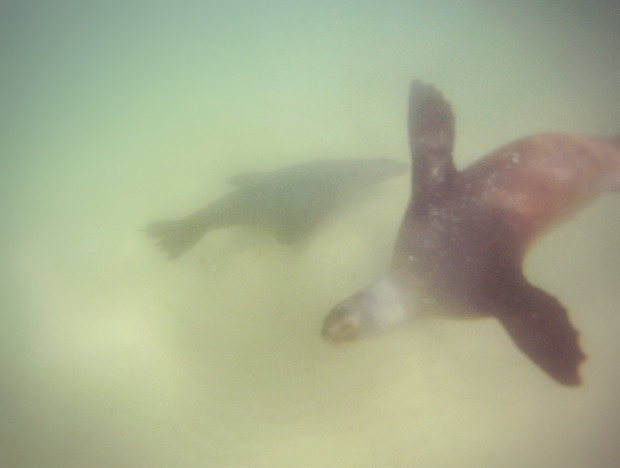 Visibly moved by the scene she saw; Teeth marks etched into seal on sea floor; Adults circling their friend forlorn; Beckoning her to join as they mourn?

She entered the house a little distracted. Something was different about her. She didn’t really say much to her colleagues milling around the breakfast table but just went straight through to her room. Clearly, something was bothering her but none of us chose to ask. Rebecca worked as a part-time guide facilitating swim adventures with seals. She had only been active with it for a few months and it was something she thoroughly enjoyed. The playful nature of seals always provided amusement and fascination and Rebecca was becoming more familiar with their personalities and behaviour. She said that she could now discern when the seals had had enough of having people in their playground. And that would be her signal to round up the tourists and depart. Later in the day, Rebecca appeared in the living room again, still quietened and a little perturbed.

“Um, I think I had one those of kind of things today that you’re on about.”

“You know, your research – those profound moments or whatever you call them.”

“Oh, meaningful nature experiences. Really?” I reached  into my pocket and pulled out my portable psychologist sofa. “Would you like to talk about it?”

Rebecca gazed at the table in front of her, before glancing up to meet my curious eyes.

“Well, I was there with all the swimmers in a group. And I swam off a little ways from them to just do a scan of the area. And then I looked down and noticed a seal motionless on the sea bed.  Like just lying there, you know. It was alive but I could clearly see it had these huge teeth marks…

“A shark bite?    (I was imagining this kind of Great White vs seal slow-motion action)

“Definitely – like carved in an arc right across its body. And you could see this seal was in trouble. It was not going to make it.”

“Ja, the other swimmers were still all together as a group. So I watched a little longer and I noticed that there were a number of adults tightly circling this seal.  But only adults – all the juveniles were back over where the swimmers were.”

“Well what was weirder was that I had the distinct impression that these seals were mourning or something. That this was some kind of, I don’t know how to say it, but some kind of last rites that they were performing. And…”

Rebecca paused for a moment to swallow upwelling emotions, and again averted her eyes toward the table. 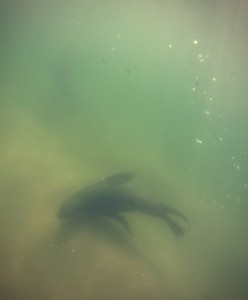 “And… I felt a part of it. It seemed like they were ok with me being there, almost willing me to participate, or at least share this moment with them. I was overwhelmed. Like, I swim these seals almost every day now but I have never been touched in that way before.  I felt an accepted part of their world.”

She looked up, her voice wavering a little.

“It really affected me.”

But Rebecca was starting to look a little self-conscious as she became aware of the feelings which she was sharing and that the story was gradually sounding far-fetched even to her own ears.

“So I mean you have been researching this kind of stuff. And I guess I just wanted to ask if you had heard any other experiences like this? Do you know anything about if animals do this kind of thing? Or is this just all my imagination?”

The uncomfortable truth was that I didn’t really know. I mean I found the possibility fascinating but it had not really been my thing. I guess I left that sort of speculation to my veterinarian/ethologist girlfriend who was more in tune with the animal dimensions. My research, at least until that point, had been flatly focused on the human dimensions. It was however undeniable that many of the meaningful nature experiences I had collected were made profound by the fact that the individuals perceived that a reciprocated communication was taking place between the individual and the animal concerned. Real or imagined, we don’t know for sure (and scientists are still working on that) – nevertheless, it was a powerful interpretation.

But this was a step further. This was asking whether animals engage in the type of complex emotionally-driven cultural behaviour we normally only think capable of the human species. Around this time, my girlfriend was immersed in the book The Emotional Lives of Animals by ethologist Marc Bekoff.  She had read a few random paragraphs and I scanned a few pages myself. Certainly, this professor presented some compelling and touching arguments. One point I recall Bekoff making was that we willingly ascribe survivalist emotions such as aggression to animals but the moment we suggest that they might be displaying something more complex like joy or sadness we feel compelled to go: “Whoa, stop right there.”

I was also absorbed with Lyall Watson’s spellbinding book Elephantoms. He told of powerful encounters where he had witnessed elephants performing burial rites over their deceased herd members. The passing in early 2012 of conservationist and ‘elephant whisperer’ Anthony Lawrence and the elephant’s apparent sensing and subsequent mourning in reaction to his death lends further to support to a level of emotion we are yet to fully acknowledge and understand.

One of the most vivid anecdotal accounts I recalled during Rebecca’s story was a  newspaper article that had been sent to me some years earlier. It concerned the death of a captive dolphin (apparently from stomach cancer) at Napier’s Marineland in New Zealand. Observers who were near the oceanarium along the beachfront reported seeing 16 wild dolphins swim toward the facility, leap out of the water and form a circle opposite Marineland, before returning to sea.

“It was as if the dolphins had come to collect Kelly’s  [the captive dolphin] spirit and bring it back to sea… it was the most incredible thing we’ve seen in our lives” said Jools, who was staying at a nearby hotel. (Source: Hawkes Bay Today)

When one died the others would stop when passing by, as if to acknowledge or confirm that it was dead. If we tried to get them to move past without stopping, they would fight to go back to the dead animal. I do not know if they understand death but they do certainly appear to grieve – based on their behaviours. (Source: New Scientist)

Over the past two years, more research and anecdotal accounts have emerged confirming that most ‘intelligent’ (however that is interpreted) mammals do indeed mourn their dead. This is quite groundbreaking because the idea of attributing human emotions to animals has long been considered dangerous territory, given fears of being charged with “anthropomorphism”. After all, anthropomorphizing is what humans do – it is part of the perception package we’re given to work with on this planet.  As Bekoff quips, if we’re told we must cease with anthropomorphizing then “we may as well pack up and go home.” Primatologist and ethologist Frans de Waal similarly argues that,

“To endow animals with human emotions has long been a scientific taboo. But if we do not, we risk missing something fundamental, about both animals and us… I’ve argued that many of what philosophers call moral sentiments can be seen in other species… you see examples of sympathy, empathy, reciprocity, a willingness to follow social rules.” (Source: Wikipedia)

Such claims are further strengthened by neurological findings that show that cetaceans possess “spindle” neurons which are the brain cells linked to empathy, grief and intuition in humans. Already over two decades ago, Italian neurophysiologists first discovered “mirror neurons”: “…a neuron that fires both when an animal acts and when the animal observes the same action performed by another. Thus, the neuron “mirrors” the behaviour of the other, as though the observer were itself acting. Such neurons have been directly observed in primates and other species including birds.”  (Source: Wikipedia) This significance of these neurons is that it suggests there may be a physiological basis for empathy. Such evidence increasingly suggests that Rebecca may not have been as crazy or anthropomorphic as she first feared. However, scientist Karen McComb in studying how elephants act when finding elephant bones, says that it is impossible to know what is really going on in animal’s mind.

“It is fascinating but out of our reach as scientists,” she says, adding that any inferences are necessarily speculative.  (Source: New Scientist)

Although speak with South Africa’s Anna Breytenbach and you may reconsider “impossible”. This professional animal communicator seeks to do just that: find out what is going on in an animals’ mind without projecting our human interpretation. She writes:

Interspecies communication is valuable in addressing the root cause that motivates actions. Understanding the core need that an animal is trying to convey through their behaviour allows us to deal effectively with the issue at hand. When we understand other species’ perspectives instead of anthropomorphizing or projecting our human interpretation, we can find much more sustainable solutions to the challenges of coexistence. (Source:  The Green Times)