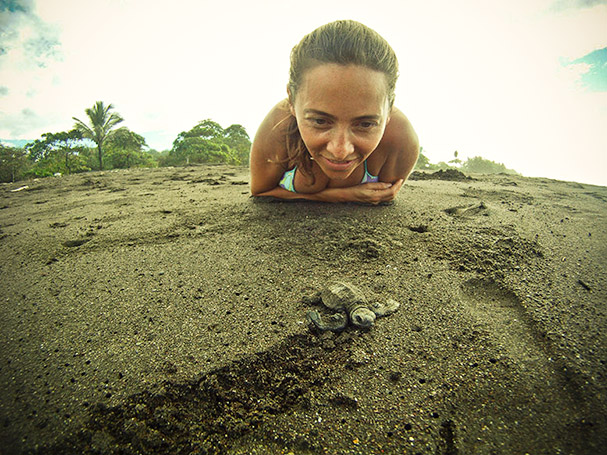 The local security guard at Playa Ostional (Costa Rica) gingerly walked out onto the beach and took a seat nearby us. Being the centre of one of ‘nature’s wonder’s’, we felt compelled to question the gentleman about everything we could in relation to Ostional’s fame for being one of the few locations in the world which is home to the periodic mass nesting of the Olive Ridley Turtle. Though it was not the information which we received which energized us back to ‘waking life’…

So we asked the gentleman about the community’s involvement in the sustainable harvesting of the eggs, the current challenges, the future threats, the economics of egg selling, the conservation successes, and the just-about-everything-else-you-could-imagine linked to the appearance of thousands of nesting Olive Ridley turtles on the Ostional Beach throughout the year. (Read EarthCollective’s Seasonal Supplement article:  ‘When community-based NRM works?‘ for details and images of the Ostional turtle phenomenon and the community egg harveting’).  His patience with us was admirable given he probably would have preferred to nurse his hangover in some solo peace and quiet.

We were almost ‘questioned-out’ and a prolonged silence feel upon us as we all looked out to sea and dwelled in our own thoughts. I happened to be wondering if Carl Jung’s concept of  ‘synchronicity’ was really just a delusion and if I had been duping myself about its validity as a legitimate phenomena. I don’t why I had that thought at that time. I just did.

The aging gentleman nimbly sprung to his legs with child-like glee and enthusiasm. He took two strides to his left and fell to his knees with a smile which contained the very wonder of nature which we had been contemplating: a healthy nest of tiny new-born Olive Ridleys was emerging from the sand to set their eyes on the new bright big world around them. I had never seen turtles hatch. I had hoped I would while at Ostional though the chances were not great. I could not have asked for a better wish come true.

The hatching entertained us all for the next 30 minutes as we watched the 50 + hatchlings make that frantic focused scurry toward the beach …weaving their way around marine debris and  instinctively aware of the hungry eyes of the vultures amassing nearby (not to mention the opportunistic crabs).  We admit we tried to play the guardian role and make sure they all made it to the water safely. Only one crow ‘out-foxed’  us and swooped on the first little Olive  Ridley to reach the water but all the rest made it to the harsh welcome of pounding waves which usually washed them back at least three times before sweeping them away in act of grace or mercy.…toward the next test: the pelicans gathering beyond the breakers and whatever else lurked beneath  the water in between.

Whether you want to call that event synchronicity does not need to be judged nor is really relevant.   What matters is that we were all instantly energized again: yelping and laughing and immersed in appreciation for these little scrambling wonders of nature. Surely it is wondrous events like these which makes this particular security guard want to protect ‘his’ incredible stretch of beach now and into the future… 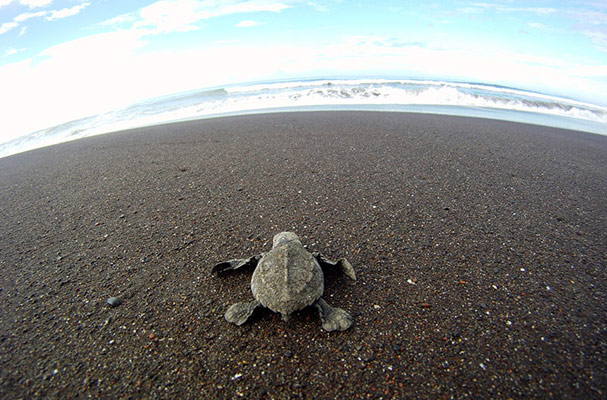 Thanks to Alejandra for her insightful questioning, translations and energy at Playa Ostiona