When the rhino saw us

Boom. There it was. Completely unexpected. Completely unsolicited. And it was huge. You just don’t realize how big a rhino is until it is right in front of you. I was in a vehicle but it didn’t feel any less intimidating.

We were teaching a field-based conservation course in a one of my favourite nature reserves in the Eastern Cape, South Africa. It is expansive, scenic, quiet and rarely on the average tourist’s must-see list.

One afternoon, ourselves as course instructors had to briefly leave the students at picnic spot in order to race back to our “base facility” to pick up another vehicle to transport the students to our next destination. It is at least a 45-60min round trip and we couldn’t afford to delay.

My co-instructor jumped in the bakkie [4×4 ute/pick-up] and off we drove at somewhat of a hurried pace. We gambled on a back road which is quicker in distance but can get a bit rough after rain. Given the lack of rain at that time, it proved to be passable. He knew the roads well and drove them at a slightly unnerving speed.  Unlike the slowly attentive drives we did with the students, on this occasion our attention was unfocused on the surroundings; we were absorbed in “shop-talk”, notably the challenges that reserve management faces and related frustrations.  It wasn’t the most desirable of conversations and we were both getting fired up (emotionally charged). In the back of the bakkie was another colleague sitting quietly and taking in the scenery. Little did I know at the time but her thoughts were absorbed elsewhere.

We wheeled around another corner of dense thicket vegetation and then screeched to a sudden stop. My mouth was agape, words left dangling mid-sentence.  The sight of a rhino “right there” was extraordinary. My heart raced. I had never seen a rhino at such close range – let along a black rhino – and I knew what they were capable of. All the stories of frenzied charges at people or vehicles had definitely left its mark in my mind. 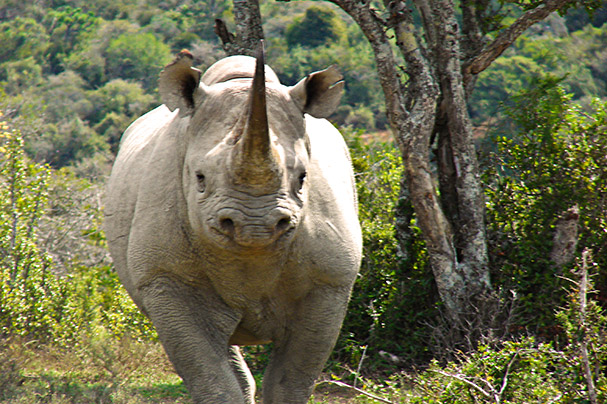 The beast was immense. It just seemed bigger than I could have previously conceptualized. Although we were later to learn that this was probably ‘only’ a sub-adult.

It stared at us. We stared at it. It was a staring standoff. Neither of us moved. In the meantime, my colleague had the presence of mind to pull out his camera and take this photo. I was waiting for the head to drop and the charge to begin – that would make an ever better photo. My adrenalin surged. But then the unexpected happened. The rhino started making its way toward us, but not in any aggressive or defensive kind of manner. It was a gentle lope, almost a trot, in our direction. The head was raised and, if anything, it was more of a curious approach. It casually moved closer and closer and then at about two metres away from the front of the vehicle my co-instructor tapped the side of the bakkie with his hands.

The rhino jerked out of its hypnotic amble and skidded into a 90 degree change in direction. The noise had sufficiently alarmed it to want to hastily trot off into the thicket off the back of the bakkie. We edged our way forward in the bakkie and looked back. It stood there a little longer looking our way before deciding to keep heading off into the dense thicket.

We were awed. It took us some moments to come to make a more normal sense of awareness and process what had just happened. I couldn’t help  wondering about what might have happened had my colleague not tapped on the bakkie. At what point would have the rhino stopped? What were its intentions? What made it approach us? We will never know of course.

I put my head out the window and asked my colleague in the back of the bakkie how the experience was for her.  After all, she had been much closer to the action than myself, without the added sense of protection from behind the windscreen. She said it was awesome as well as  frightening and then she added something else, “You know what I was thinking as were driving along?”  “What’s that?”   “I was wondering about how safe I would be in the back of the bakkie should we encounter a rhino at close range, what would I do ….”

Later, she reflected some more:

“That was a powerful one. As were driving I felt there was a big animal close. I was in the back of the bakkie and I felt that something was close and I was just looking and searching. And I just knew. I don’t remember if I knew there was a rhino there but I felt something was there and I was on the back of the bakkie and sometimes you just know. Like that feeling of I am sure I am going to see something and that something came and it was a rhino. Then the rhino started approaching, maybe just to be caressed! [laughs]