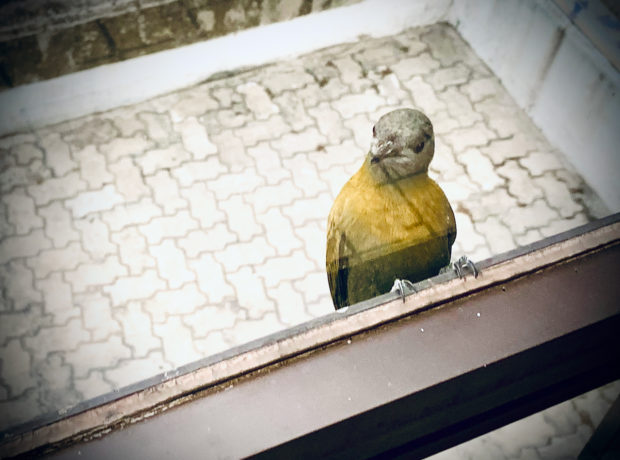 The host’s story breezed by me at first. She was introducing the online event with a personal account and I was hardly listening as I washed dishes awaiting for the actual interview to begin.

“Hang on, did I hear that correctly?” I quizzed myself.  Candour and sharing of this kind wasn’t what I was expecting to hear on this broadcast. So I paused and replayed it. Indeed, I had heard correctly: it was a profound and meaningful nature experience. Some would even say ‘synchronicity‘. And hearing her story about a timely bird encounter involving a newborn child teleported me back to the birth of my own son a year earlier.

In a recent Audubon California interview with bird language specialist Dan Gardoqui, host Molly Tsongas begins by sharing a poignant experience involving the birth of her sister’s child which, due to travel restrictions, she was sad she could not be present for.

She heard that her nephew had been born during the night and the following morning went for her usual walk in the neighbourhood. At one point, she felt a potent energy that made her feel incredibly connected to this new yet distant family member – as if there was an “air full of love”. In the same instant, she looked up and saw two mourning doves sitting above her on the wire overhead and felt that they too were counterparts in this powerful scene.  Molly breathed in and relished the moment.

Later in the day she learned the name of her nephew was Callum. She wondered what it meant and looked up the name only to be astounded that Callum was a Scottish/Gaelic name meaning “dove”.  Molly was awed and felt immense gratitude for the way in which birds can brings us closer to loved ones far-away…and can also be connecting companions at this time.

Molly’s story triggered a memory of my own.

Many traditions consider birds as being a messenger between worlds. The word ‘omen’ is thought to originate from the Latin ‘auspex’, meaning “interpreter of signs given by birds”. Similarly, the Greek ‘oionos’ is said to refer to “bird of prey, bird of omen”.

A year ago, we welcomed our son into the world here in South Africa.  As first-time parents, we were facing a lot of unknowns and scenarios we had not envisaged – a hospital birth with emergency C-Section, and a new-born that was losing weight in the first days of his fragile life.

On the fourth day in hospital, we had an awkward encounter with the on-duty paediatrician and felt immense pressure to take decisions we had not anticipated. I was starting to lose my inner calm and feeling a magnitude of stress and responsibility that was completely new. It dawned on me with some overwhelm that I was now a guardian for this little life.

I had to leave the hospital to collect an item from our car. As I descended the stairwell, I noticed a bird rapping on the glass window. It took me by complete surprise.  I studied it again and was amazed to realise that it was an Olive Woodpecker  – not a species I had expected to see in city centre at Level 2 of a hospital building, and let alone at this moment.  I was jolted out of my brooding thoughts and now found myself in curious wonderment.

I glanced around to see if others in the bustling hospital were sharing my delight.  No-one else had noticed it.

For several minutes, this woodpecker and I shared these moments alone in the stairwell. Oddly, no-one passed us during that time, and no-one else had seen or heard it. Even though the ecologist in me reasoned that the woodpecker may have simply been fascinated with its reflection, the experience nevertheless felt distinctly numinous: as though the woodpecker was ‘there for me’.

And in that private moment, there was an unexpected catharsis: I felt some relief – somehow a reassurance that everything in the world was actually OK  – that it was going to be alright and nothing to fear. As it turned out, our son began regaining weight in the next 24 hours; gratefully we did not need to take the serious actions that we were being urged to consider.

In the life-upending moment that is the brith of one’s first child, I never really had much time to reflect on that moment again. I shared it with my wife at the time and left it at that. The moment had served its purpose.

Yet upon hearing Molly’s story this week, I decided to check an old book I had on the shelf: “Birds: Divine Messengers” authored by South Africa physiotherapist Andrea Wansbury, whom I interviewed back in 2010 as part of my PhD research on meaningful nature experiences.

Synchronicity is often associated with emotionally-charged moments, major life transitions, and when the psyche is expressing ‘a need’.

Curiously, Wansbury found that the Woodpecker carries the “Child” archetype and core message it brings is one of “Security”.  She further elaborates that the uncanny appearance of the Woodpecker in our life invites us to ask the questions:

“Do you have an underlying feeling of apprehension that the whole world is unsafe place in which to live and that there is danger lurking on every corner?” [Will you] only move forward if you can be guaranteed a positive and safe outcome?…The woodpecker is asking you to understand that these issues of insecurity are only based on perceptions and that you are more than capable of creating your own sense of security. All that’s needed to take a step into the unknown is the faith of a child and the convictions of an adult.

Oddly indeed, many of these feelings were bubbling within me at that time. And to read this interpretation a year later has been a nourishing reminder, particularly now with COVID-19. Watching the innate faith of our year-old son indeed strengthens my convictions as an adult to shape my perceptions in a way that allows the possibility for a positive life of innate security.