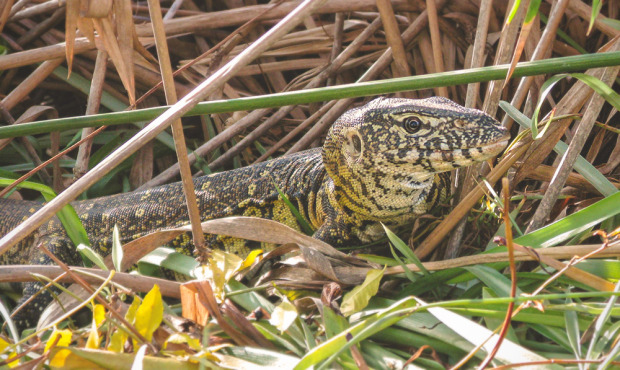 Was the appearance of a Nile monitor lizard uncanny coincidence or unintentional ‘call up’?

It was a typical June winter’s morning in 2009 and I entered the kitchen in a curious frame of mind. I greeted “Lungi” – a young Xhosa woman who worked at our research village – and casually enquired if there were any particular animals that were of (cultural) significance to her. After seemingly considering the request for a few moments, Lungi shyly replied, “the leguaan” (Nile monitor lizard, Varanus niloticus). I found this interesting because, given Lungi’s age and trendiness, I thought that she may have left those historical beliefs or totemic-like connections behind.

I wandered off to the office to devote the rest of the morning working on my research proposal. Specifically, I battled with a section which sought to justify the concept of nature-based synchronicity as a phenomenon worthy of scientific exploration.

Upon returning to the house for lunch, I found my housemate’s dog leaping in front of a shrub in a frantic barking frenzy. There, ambling with an air of nonchalance, was a large leguaan (pictured). I was naturally surprised – this was only the second leguaan I had seen during my three-years living at these premises.

Lungi came out of the house to check on the commotion. I turned to her and, with a look of bemusement, I sheepishly smiled, “Look, it’s a leguaan”. Her piercing disconcerting glance back toward me seemed to both acknowledge the obvious coincidence yet, equally, sap my enthusiasm as I was made to feel that I was somehow complicit in orchestrating this event.

Lungi reluctantly accompanied me toward the shrubs that shrouded the large lizard and peered cautiously in its direction. Upon catching a glimpse, she backed off and returned to the house, appearing slightly troubled.

I said nothing more because, in that moment, I recalled that vocalizing totems can be a cultural taboo. Specifically, inadvertently (i.e. carelessly) ‘calling them up’ could be seen as a sign of disrespect to the ancestors which the messenger animal may represent. I remembered visiting Dwesa Nature Reserve a few years earlier and hearing our Xhosa guide tell us that his family totem was the leopard and he therefore could not speak its name when in the forest. However, if he were to see a leopard in the forest, he would take that as a sign that his ancestors wished to communicate with him, which may or may not be a good thing.

So at that point, I felt it more prudent to leave both Lungi and the leguaan in peace and allow further interpretations of that encounter to meaningfully unfold in the caverns of our respective inner worlds.