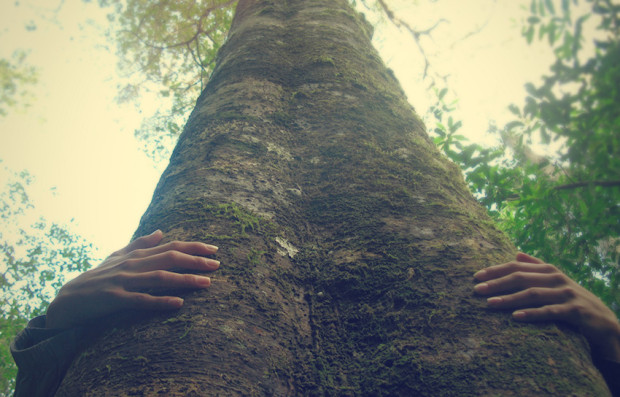 You know you are an ecologist but your friends think you are a ‘bunny-hugger’*. This can be irritating, especially when, in your line of work, you encounter some real ‘bunny-hugger’ cases – y’know, people that have to love all of nature and that. Bah. After all, you believe you operate with unparalleled reason, you have a balanced and informed understanding of the complexities of the ecological web of life and are not susceptible to letting rash unbridled emotions get in the way of tough decisions…unlike those bunny-huggers. Well, maybe they are not always such a bad bunch, you reflect with some empathy:  after all, bunny-huggers also share your passion for the environment. It’s just that sometimes it seems their heart is in the wrong place, a place which gets in the way of common sense decisions that can make you look cold and callous…especially when it comes to ‘eradicating’ alien species.

As part of my research on meaningful nature experiences (MNEs), I investigated how the presence of invasive alien (non-native/exotic) species (IAS) may be perceived to affect MNEs. The mere mention of IAS can evoke a range of reactions. Whilst my research findings found that the general perception of IAS is that they undermine MNEs, the context is critical. But what determines the ‘right context’ is highly subjective and contested terrain which can quickly descend into an ethical quagmire. And this is where you, the ecologist, point to the bunny-huggers. If only they would remove their fluffy bunny-hugger mittens, you would be able to get on with conserving endangered ecosystems. If only… it were that simple…

During my interviews in South Africa, I spoke with various persons about IAS. Jeremy and Markus expressed their irritation toward the perceptions held by ‘bunny-huggers’ and, worse, that they as ‘conservators’ or ‘ecologists’ may be tarnished with the same brush in their professional capacity. Their reflections illustrate recurring frustrations encountered in dealing with persons who struggle with – or outright object to – the idea of ‘killing for conservation’.

The problem is that you have people who are bunny-huggers and will say, “But you can’t kill any animal.” You get [bird species] in our ponds and people say, “But they are my animals, you cannot do this!” But they are destroying our bigger environment. [Jeremy]

I’m not a greenie. I am an ecologist and I think of things in a natural way. To me, greenies are people that sort of like hug everything and think everything must be loved and everything must be protected. And that’s not the way – you don’t protect aliens and things that are a real threat to the natural environment. It is a misguided thing. To change that with a real bunny-hugger case is not easy because it is an emotional thing. It is not a straightforward thing… You need to understand people’s psyche, before you start trying to address it. But you can make serious enemies, eh. [Markus]

The source of antagonism appears to centre on the debate or moral stance on individual rights versus community (holistic) rights. Ecologists’, by definition, side firmly with the rational and reasoned approach that “If you are going to have to kill something then kill it to preserve the bigger picture in the environment” [Jeremy] as opposed to the more emotional-based individual appeal for a “love for what lives” [Bridget].

[but] I like my blue gums, because I think they are attractive trees. They are artistic …And this big one I’ve got down here next to my house. Gee, imagine getting that out. That would be sad, because it is very grand. I mean, you feel a fondness for them, don’t you? [Sue]

I adore giant old blue gum trees. They are giant old fathers of the forest. The small ones I can manage [to remove]… it is interesting that it is the old growth that bothers me – and I don’t care what it is… old growth – the thought of hacking down an ancient old tree is very hard to me… So, I have very mixed feelings about it. [Bridget]

The emotion attached to this sense of specialness may therefore influence behaviour toward IAS. For Bridget and Sue, it was sufficient motivation to object to their removal. For Greg, the specialness of old large eucalypts (often an IAS in South Africa) evoked a sense of empathy which challenged existing knowledge and made the act of removal a difficult task.

Yeah, you know, swinging an axe against a big eucalyptus is tough. I was in a big eucalyptus grove …and having a go at them. And these were like big old trees in a grove… And going in there, I was thinking, “Yeah, these guys are sucking big water and I’ve got to just do my bit here and…” But as I was ring-barking the first two I was thinking, “Wow, there has got to be a lot going on with this tree right now, as I’m stripping this bark off this tree.”  And feeling this for the tree, I definitely am, because there is nothing else there apart from this big grove…[Greg]

These types of experiences can have a profound impact on ingrained perceptions and entrenched positions. For example, Joy had a MNE among a stand of IAS: in a country like South Africa, with periodic outbreaks of xenophobic violence, she was confronted with the uncomfortable metaphor for human immigration and alienation. Nature held up a mirror and forced her to question her own sense of belonging.

I changed a hell of a lot in terms of my attitude to invasive species. Yes I know all the biological and ecological reasons why they are not a good thing and should be gotten rid of. But I’m not nearly as purist or rampant…or as kind of single-mindedly negative about them… as I used to be. Because I see it also as life and as valuable…I think they are beautiful, I think they are useful, I think they have meaning…I even have a kind of compassion for alien species now …that’s a big transition! [Joy]

Other interviewees acknowledged that whilst beauty and sentimentality play their role in fostering emotional attachment, this still remains secondary to the straightforward logic associated with impacts on ecology. For the likes of Markus, acceptance of beauty as a motivation was powerfully displaced by, somewhat paradoxically, emotive feelings of hate toward the invasiveness of such trees:

And I spent many hours with old ladies over the phone because they would fight with us because we would take out their beautiful old blue gums or wattle or their pines or whatever. But they are completely misinformed and I can understand where it comes from. To them it is a beautiful tree and I don’t doubt that. My problem is, my dealing with it is, what the threat to the natural environment is – and that is where my hatred for these aliens comes in. Not for… the blue gum. There is a blue gum there outside my door on the pavement…but it is still a beautiful tree. But if it becomes an invader and threatens my garden then I will take it out straight away. In fact, I’ve killed quite a few of these trees already. [Markus]

Argued this way, the context may seem clear-cut. But how do we know when have found the ‘right context’ for removal? We might be inclined to agree with Fiona who reflected on the need to find ‘a balance’ between recognizing the beauty of individual ‘big old trees’ alongside other potential impacts on ecology from new dense growth threatening entire ecosystems.

For me, I think there needs to be a balance. Because there are certain things which are very invasive and, for me anyway, it totally destroys your ability to have a meaningful nature experience. And yet, there are others that don’t. For example, in Cape Town there is a lot of talk about how they must cut down all those trees – 100-year-old oaks, and Japanese trees, and all that kind of stuff. I think you could probably have a meaningful experience in that place because there are these beautiful big old trees and they have been there forever. And it is just different from a tightly packed invasion of Port Jackson. So I think there needs to be a little bit of a balance – it is not just any tree that is non-indigenous. [Fiona]

Most conservation practitioners would agree. In fact, given limited resources available, IAS management usually prioritizes ‘invasiveness’ and not ‘just any tree that is non-indigenous’.  But this view – or context – is still not likely to satisfy everyone. Jeremy, for one, disagrees:

You get people complaining because they are killing the trees on Table Mountain.  Yes, they have been there for 100 years… but so what?!… We are conservators. We are not bunny-huggers.  [Jeremy]

So, how about you? Do you identify with the ecologist/conservationist or bunny hugger*?

Or all of the above?

So it just depends on your perspective. And I don’t think I really want to own one perspective, because my perspective is quite changeable according to what is most important for me at the time. And that doesn’t help anyone does it?!  But I’m far less entrenched in a position than I used to be. I can see many more sides of the story now than I did before [laughs].[Joy]

*‘Bunny-hugger’: a South African term equivalent to ‘tree-hugger’ used to refer to persons who desire to love and protect all life to the point that they object to its killing for any reason. It’s probably fair to say that bunny-hugger’s are: a) not one homogeneous category; b) unfairly stigmatized at times; c) can have a higher connectedness with nature than many persons, including some ecologists; and d) may at times only actually really exist in the minds of their adversaries (who are otherwise quick to label a trait which may be an expression of sensitivity, empathy and/or connectedness). On the other hand, there are well known examples when reactions of bunny-huggers of the (possibly more disconnected) animal-rights-activist-type have been to known cause considerable consternation with their objections – just ask New Zealander conservationists about the culling of their cuddly Australian possums. And ‘moral standpoints’ are not always defensible in a court of law: one European IAS manager was successfully prosecuted some years ago after opponents found his management (i.e. eradication) of an invasive animal to be unlawful…

All persons’ names used in this article are pseudonyms (however, eucalypts were denied anonymity).