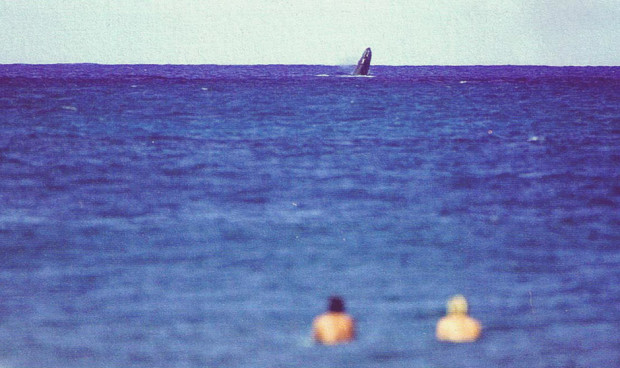 In March 2005 English tourist Chris Sullivan was attacked by a Great White shark off Noordhoek Beach during his first surf in SA waters. Comedian Mark Sampson was the guy who took him surfing that day, and only escaped involvement because his board had snapped in half mere minutes before. This is a true story that occurred in November 2006.

Now there’s genuine, rational fear and then there’s paranoia. Of course the trick is knowing which is which. That’s a problem we all face in the water today. For months after the attack I was so paranoid I wore my shark shield daily, all day. I spent so long in that electromagnetic field I started growing a third testicle. Behind my knee.

Fear itself is often totally irrational, as our perception of reality is so easily thrown off balance. For instance, when you get drunk you develop “Beer Goggles” and every girl looks gorgeous, right? It’s only the next morning you realise just how skewed your perceptions were… When you’re paranoid, the opposite happens and you end up wearing “Fear Goggles” – everything looks Really Baaaaaaaaad. (George W. Bush has a huge pair.) Fear Goggles stop you seeing the good stuff that’s in front of your nose, like that early morning sun glittering off the ripples as you paddle through the line up. You don’t see that – no, you only see the dark shapes lurking beneath.

So it’s nearly two years after the attack and I’m still pretty paranoid, but I’m surfing Dunes for the first time with no shark shield. There’s only two other guys out, it’s a clean 4-5 foot and the water’s super clear when we suddenly check this huge, dark shape looming nearby. The Fear Goggles spring on. A few moments later, I realise it’s just a whale. I breathe a sigh of relief and carefully flush out my suit…

The whale soon comes back to us for another look. I’ve seen this before, they come up to you, they check you out, they leave. It’s cool. But this one was small, about 20 feet, probably a teenage whale, flirty and very curious. She came within about 10 feet of us, so the other guys paddled away. That’s a normal response – they seem quite scary, just because you feel so tiny and vulnerable. But for some reason I thought this was the time to face up to my irrational fears, and ditch the Fear Goggles. So I stood my ground, and we just looked at each other, eye to eye.

There was a real sense of understanding. I felt that profound connection we share with sea mammals. After all, like us, they evolved onto land, then, realising their mistake, returned to the water. As surfers, we understand their motivation better than anyone.

So the next time my new buxom friend pops up I paddle towards her. She slowly swims right under my board only about 2 or 3 feet down. Spooky but amazing. The next time she comes back I reach out and touch her. She feels soft and smooth and squidgy. She feels funny. She feels wonderful.

She came back to play with me a total of nine times, six of which involved touching. One time I lay floating on my back and she passed under me, brushing my legs with her back. The last three times she came in a circle to tempt me with her tail – hauling it in front of me so I could hold on for a ride. I left my board each time and hung on for a few metres. She was so gentle and slow, it was mind blowing. It was such an intimate and sensual experience, it was like being on a water bed with Anna Nicole Smith.

The other guys had already gone in and so we spent about half an hour together, just us. It felt like we really grew to trust each other. I’ve never heard of anyone else scoring a ride with a whale or sharing even a touch. So, wow, I feel truly blessed. It was the most amazing sensory experience of my life, and it was better than any kind of counseling or medication I could get to counter the shark attack. It was true therapy. Whale Therapy.

Thanks to that whale, I’m now over my paranoia. I’m still frightened of sharks – no amount of silly statistics is ever gonna change that. So what if 652 people were killed by chairs and only 4 by sharks? Maybe I’m just being paranoid here, but “rethink the shark”? Surely, please, someone redesign the chair!