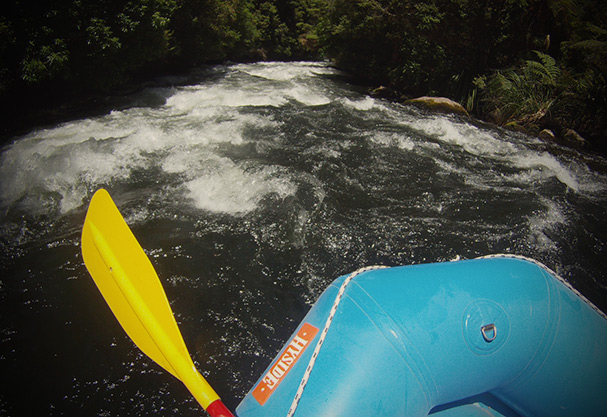 Adventurers plunging into the depths of the Tasmanian wilderness were so moved by the experience they decided to change the way they lived when they got home, interviews for a PhD project have found.

And not only were participants moved to live simpler lives, they also decided to be nicer to other people.

University of Tasmania geography and environmental studies doctoral candidate Marcus Morse interviewed 32 people at the end of a series of nine-day rafting trips down the Franklin River in western Tasmania.

He will present a paper on his findings at a university conference next Monday. Mr Morse, himself a rafting guide and an outdoor education specialist, interviewed two groups: city-slicker bush novices on a commercial rafting trip and more experienced expeditioners travelling under their own steam. He asked them what they found most moving or meaningful on the trip.

“They had a sense of being part of a larger system (of nature and the universe) and they were reassured by that feeling.

“They often had a sense of awe and wonder, particularly about the place and about how that area exists on its own and goes on regardless of whether they’re there.”

Many also found awe-inspiring beauty on a micro scale, such as a small waterfall surrounded by moss.

“Quite a few got a sense of renewal from being immersed and in the moment, based on the length of the trip and rhythm and simpleness of being on a rafting trip.

“A lot experienced clarity in terms of their perspective (on life) … about what they found more important, and it also caused people to question their values or (think) about the part that people play in the world.

“People talked about the way they might live themselves. It was more a renewal of perspective: believing what they believed more deeply and seeing more clearly.”

Mr Morse said the two groups, though from different backgrounds, found common ground in the way the wilderness experience had change their views on life.

“Some felt more strongly about a change in career or amount of time they gave to different parts of their life,” he said.

“Others were encouraged and reaffirmed in their environmental beliefs … that they would act and do something rather than just think about it. Some were more determined to be more empathetic when they got home.”