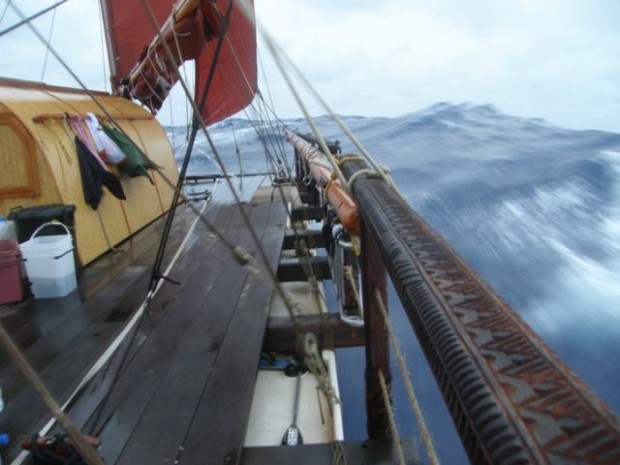 “The Question” voyages the Pacific

To celebrate the International Year of Biodiversity, crew members from the Samoa Voyaging Society are currently sailing the Pacific in an effort to spread regional awareness about conserving their environment. Along the way, the crew members will also ask The Question – “What did nature do for you today?” to the (islander) people they meet during their Pacific voyage.  But at the moment, nature is serving up mountainous seas…

The massive journey is a partnership between the Samoa Voyaging Society, the Secretariat of the Pacific Regional Programme (SPREP) and the Coral Reef Initiative for the South Pacific (CRISP).  Seven other Pacific islands groups  from American Samoa, the Cook Islands, Fiji, New Zealand, Tahiti, Tonga and Western Samoa are mounting a joint effort to  both raise awareness about (marine) biodiversity conservation as well as working toward revive their cultural traditions of ocean voyaging by using a double-hulled canoe and the lost art of navigating by the stars.

The SPREP reports that “over the next few months, seven of the Samoan “Va’a Gaualofa” crew will sail to French Polynesia, the Cook Islands, Samoa and Tokelau as part of the Pacific voyaging expedition. During the Pacific voyage the Va’a Gaualofa crew will act as observers by documenting all rubbish, oil spills or any forms of marine life that they sight upon a geographical information system. They will take images of their sightings and mark their findings on a map to explain and show their results while the va’a is docked in the different harbours throughout the region.”

These voyage sightings as well as results to their visual survey of “What did nature do for you today?”  will be made into short awareness films which will be on show during an interactive learning exhibition at each stop that the Va’a Gaualofa crew makes.

The Va’a Gaualofa crew departed on the 18th April and as of 3rd May (Day 13) found themselves soaking wet as they continue to battle mountainous seas. They are having to bail out 3 – 8 buckets of water a day from their canoe in what has become a high pressure situation only made easier my plenty of jokes amongst the crew to keep spirits up. In their own words they reflect that they have been “pretty much been battered, beaten up and smashed by mother nature for the past week. We’ve been through her washing machine, and so far we haven’t seen much of a gentle cycle…”

These intense and life challenging and changing experiences certainly put a different but yet equally important spin on “What did nature do for you today?”