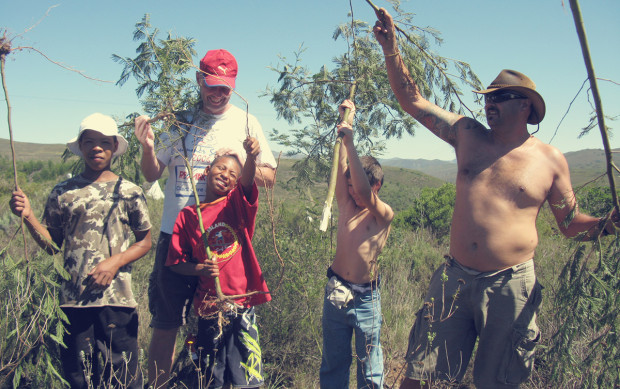 Kouga Valley (SA): I was recently invited by TerraPi to partake in an environmental education weekend for 25 children from Maranatha and Protea shelters for street youth/orphans (and their carers/guardians) from the nearby city of Port Elizabeth. TerraPi has run a number of these courses already during the past year or so and facilitator’s Rob and Yvette’s shared enthusiasm and passion for educating about connecting to nature and environmental issues such as exotic weeds (i.e. invasive species such as black wattle – Acacia mearnsii) is impressive. The youth engaged in a range of activities which included guided nature walks (sometimes in silence), wildlife spotting, removal of black wattle seedlings, storytelling, drumming and free-time.

Part of my personal interest (and linked to my evolving PhD research) was also to gain insight into how urban youth perceive alien invasive species, if the presence of these trees enhances or diminishes their fresh nature experience and if/how education about such issues can be improved for the future. 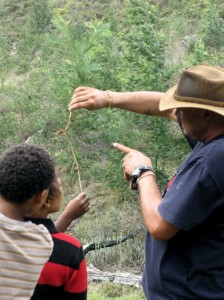 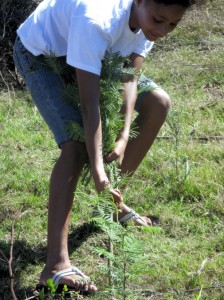 During the weekend, as part of the program or casual chit-chat, a number of youth were invited to reflect on what they learned, and to share their views on invasive species such as black wattle. Some of the responses were very humbling. Many of the youth recalled that the black wattle trees are responsible for taking up a lot of water and choking waterways. And that in a water scarce country like South Africa this isn’t good. But upon speaking to the children a little longer it became clear – and quite understandably – that for youth who are generally nature deprived, the idea that a nice shade-giving tree could be also seen as ‘bad’ was a bit difficult to grasp. The children were asked that if a black wattle could talk what they would think it was saying to them. A few responses were naturally “Don’t pull me out” and “I haven’t done anything wrong”. There were more insightful reflections to the whole black wattle dilemma but none topped the gentle protest by one boy that: “God doesn’t make mistakes”….

A key question remains about one can effectively educate about exotic weed removal whilst still encouraging youth to foster respect for the very nature they are being asked to harm. Coming from a perspective of ‘interconnectedness of all things’, this is not necessarily an easy one to solve….

eyes4earth is an education outreach initiative for doctoral research being carried out by Matthew Zylstra at Stellenbosch University and funded by the DST-NRF Centre of Excellence for Invasion Biology (2009-2011).