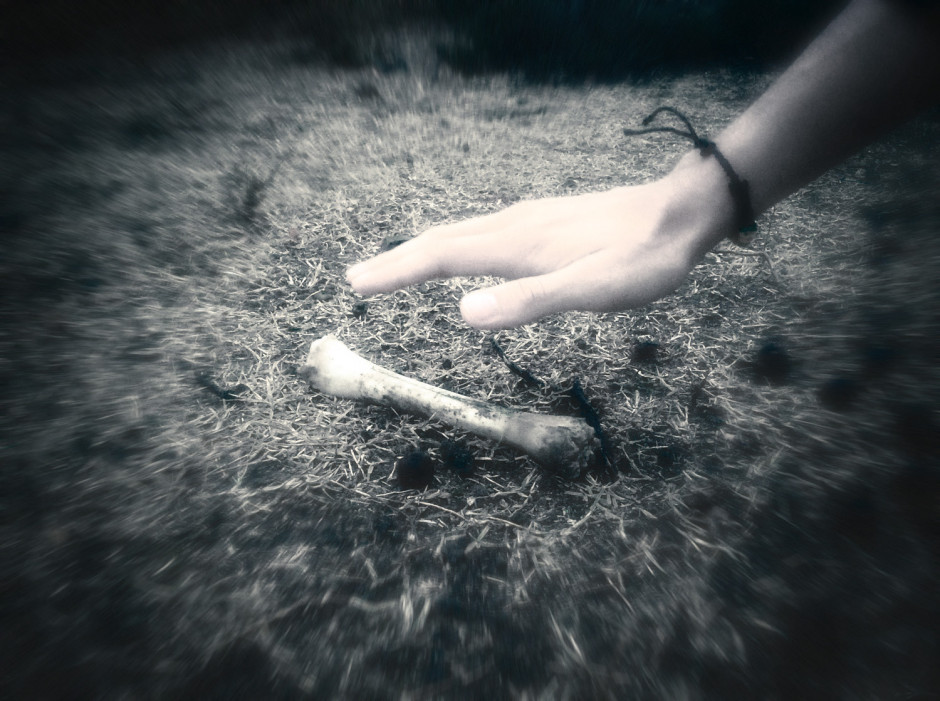 Feel it in the bones

In some of the university field courses we facilitate, we devote a day to allowing students to have fun exploring other ways of knowing, sensing and experiencing ecological phenomena. One of the activities may be termed as either ‘signature tracking’, ‘sensory tracking’ or ‘spirit tracking’ and essentially focuses the non-visual senses and intuitive perception to elicit information about an animal. The technique is based on Indigenous accounts (e.g. /Xam hunter-gatherers,  Apache Indians) that describe ‘presentiments’: i.e. the ability of a tracker or hunter to foretell impending events or the type or location of the animal by interpreting sensations felt in different parts of their own body (Bleek & Lloyd 1911; Liebenberg 1990; McCallum 2005).

The following is one student’s account of his curious experience as recorded in his course field journal:

Today I noticed a feeling I have never felt before. Today we tried to feel the energy around different types of animal spoor. It started as a fun and silly experiment but ended up becoming a slight spiritual experience. The start of the event was troubling for me. My partner led me to a pile of scat and then an area of tracks. Neither of these areas held any type of feeling for me and I was unable to sense anything with my eyes closed or open.

The true spiritual experience started when [our field instructor] told us to explore with our eyes open and try to sense anything: warmth, cold, tingling, with our hands above different objects. I chose to explore a pile of bones and, to my surprise, I was able to sense a cold, hollow feeling through the centre of my hand as it passed over the bones. This feeling was not immediate and it did take an honest good while to feel the differences above and below the bones.

Once I had this feeling locked in, I attempted to test it on another nearby pile, possibly from the same animal, and felt the feeling once again. I was quite surprised at this revelation and my field instructor came over to ask how it was going. I explained this new-found feeling and she asked if she could lead me to a new object to test if I could sense it.

With my eyes closed, she led me to another bone (possibly from the same animal) but did not tell me it was there. In fact, there was much more scat around me that went completely unnoticed as I scanned the area with my hand hovering a few inches above the ground.

I started the scan with my hand moving slowly from right to left. I felt the sensation and paused. I knew it was there. But I told myself to continue scanning in case I was wrong but as I moved away I quickly realized I didn’t need to and returned to the spot. This time I actually sensed the size as well as the orientation of the bone, enough so that I felt the bone literally before I opened my eyes.

As I opened my eyes, I was shocked and slightly spooked. I did not expect to be able to figure out the placement of anything without actually seeing the object. I sat there for a while marvelling the fact that I ‘saw’ the bone (in my mind’s eye). I took awhile to send my respects to the animal that once belonged to these bones.

After our talk earlier in the day with a local anthropologist studying Xhosa and Zulu belief systems, my mind was thinking of spirits and how they find ways to communicate with others. I have never been a religious person, but I do find myself to be very spiritual. I am also suspicious of many things however so I take this experience with a grain of salt… but I do slightly believe it may have been a way of communicating with the spirit of the dead animal, or at least the energy left behind. The feeling I had was if the energy of the bones below my hand was travelling through my hand up into the skies and universe.

What brought this idea further was my discussion with [another student] about this. I explained the experience to her and she said she couldn’t feel anything, so I took her to the same first collection of bones I had felt and left her there. Later I asked her about it and she said she had felt and seen the orientation and angle of the bones with her eyes closed as well.

I am not sure if we could both feel the presence of a past animal or not, but the whole event has put many questions in my mind about how to approach things in nature. I will undoubtedly be trying this experiment again on bones in the future, and I hope it gets further enough to even see the face of the animal… eventually.