This story is submitted by ‘Ana’; the photo is of the actual creature described and in the same spot where this event unfolded. 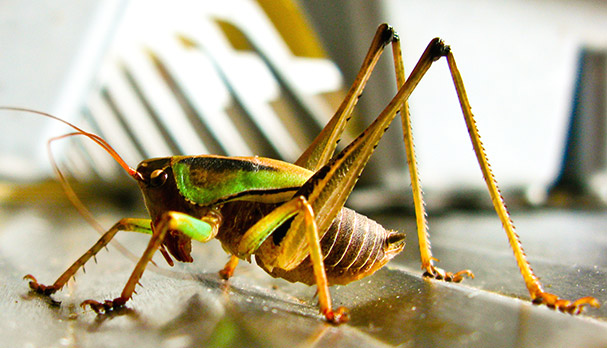 Living in a rural area of South Africa where it is rare to see people around but lots of animals you start getting curious about the animal kingdom. You start vibrating in a different frequency where you resonate more with the animals and take them more into consideration in daily living.

One day, we found a small ground cricket  living in the house. He likes living in the same spot by a basket, maybe it was a good place to hide and hunt. We were always careful when around the small basket, so the cricket would not feel threatened. After a few weeks when the cricket got more comfortable at the house, we saw him in different places… existing and exploring. Sometimes close to the stove other times close to the floor… we got to know each other better each day.

One day I found him around the dirty dishes, I guess a good place to be for foraging. He moved quickly when I started moving the dishes and made himself present in the area…. I apologised and told him that he was safe, no worries that I just needed to get the dishes done.  While I was doing the dishes, he was watching carefully, I got curious and got a closer look… such a beautiful animal green and brown with such a detailed architectural body type. After having a good look I just realized that I had never heard this animal sing; crickets must make sounds, so I was doubting if this particular cricket could make a sound… After living with each other for about a month and seeing him almost daily, from the first day that he shed the skin and left it by his favourite basket to so many days later, I realized I had never heard this cricket sing or make any noise.

So I continued washing the dishes and just a few seconds later the most beautiful and loud sound reached my ears. So loud that I could not believe that this small cricket could make such a powerful sound. I was speechless … Was he showing off? Seems that he just knew! Seems that he could understand and read my thoughts and he just decided to give me a lesson. I was so grateful for such an unbelievable moment.