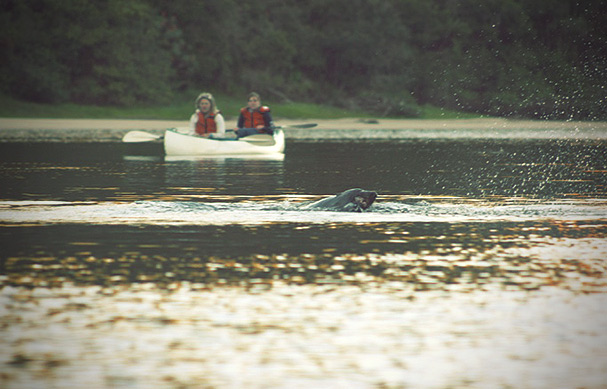 It had been a serene canoe paddle on the picturesque Keurbooms River at  Plettenberg Bay.  There were just a small group of us and after a couple of peaceful hours on the water, we had almost returned to our starting point. For some of the group, these were also the last minutes of their time working or volunteering at Plettenberg Bay – a finale of sorts.

Smashing the silence came an unexpected thrashing-like splash. For the lead canoe, the action was only 10-20 metres ahead. It took everyone some moments to register what was going on. We were in an area known for its whales, dolphins, great white sharks, seals and otters but here we were at least two kilometres up a tidal river in what appeared to be largely freshish-brackish water on the outgoing tide.

As our eyes came into focus, we saw that it was a seal.  And it was massive.  It was thrashing about with a freshly caught fish in its jaws, which was also of huge proportions.

A few people managed to pull out the cameras and snap some action shots in the fading light.  It was a fascinating spectacle witnessing such a powerful creature at close range deftly devouring its prey.  We were all mesmerized and savouring this sight – and this parting gift from this beautiful part of the world.

Later we talked about our experiences and all that our senses took in. We knew seals travelled far from their colony on a daily basis but were curious to see such a large solo seal this far up the river this late in the day.  We wondered whether this seal had found him/herself an exclusive and plentiful source which it was keeping secret from the rest of the colony.  Or maybe this seal preferred the taste of freshwater fish.