Mind awash with The Question

A dead fish on the beach. Hardly appears to be the stuff that meaningful nature experiences might be made of…or does it?

I took this picture back in 2007 when up at Nhulunbuy in Arnhem Land, Australia (land of the Yolngu Aboriginal people). At the time, I was pretty obsessed with our initial eyes4earth.org flagship initiative called “The Question”, i.e. What did nature do for you today? It was an outreach program aimed at communicating the concept of ‘ecosystem services’ to the broader public. So I was quite active in taking pictures of diverse ecosystem services (i.e. benefits of nature for human well-being) in an effort to raise awareness in various creative shapes and forms. The other thing I would try and do is to find question mark symbols, i.e. ” ? ” which naturally occurred in nature. For example, we once had a gecko lizard which curled in the ” ? ” shape as well as a praying mantis, millipede, worms, roots of trees doing the same.

Walking along the beach one sunset, I came across this dead fish on the beach. I am not sure why I thought that a dead fish might one day make useful ecosystem service promotional material but, with no better ideas,  I began taking a few photos of this ‘necromass’. Without specific intent, I tried to capture an image of the fish as the water lapped up around it. I did this once, and in the low light with an average early series digital camera, I totally blurred it. I tried it once more and thought, “Oh, that might have worked.” I looked at the image on the screen. Paused. Creased by brow. Looked again. Raised an eyebrow “Crikey, no way…” 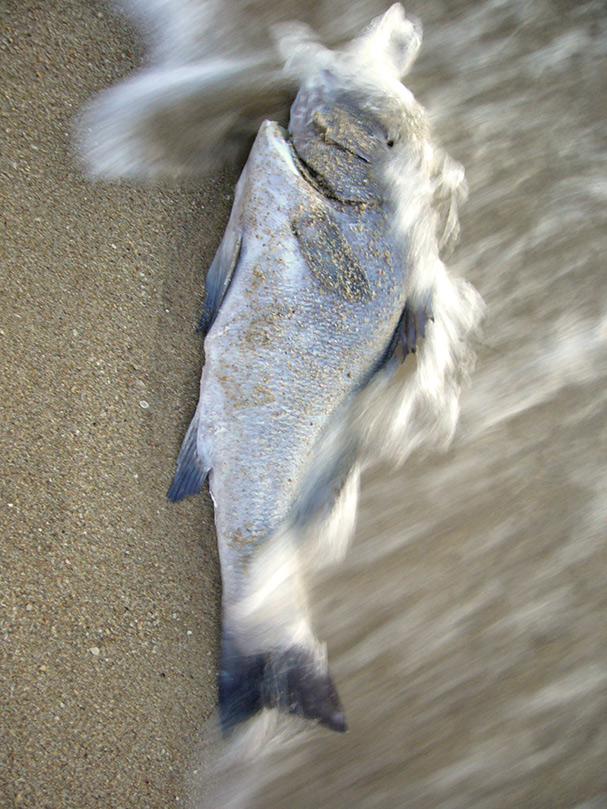 Maybe I had too many ‘question marks’ [?] on the brain but I was totally bemused at the resulting image: the water had lapped up and around this fish to form a near unmissable question mark shape. Maybe I was the only one who could see it…. and maybe I still am! But it definitely was an uncanny moment which resonated with me. It gave experiential weight to the idea that we see what we give focused attention to. I always thought this to be something which might manifest in one’s own (distorted subjective) perception and not necessarily in a more universal objective ‘reality’ (i.e. that others may be able to see or experience the same). And whilst I still believe that to remain true, I have also come to realize that a trait of synchronicity is that it can also be a shared experience in an inter-subjective reality – and this can be even more profound.

So, as you are looking at this image, consider that the ocean may be asking you:
“What did nature do for you today?”

Might also be a good moment to give a humble nod of thanks. I know I did.