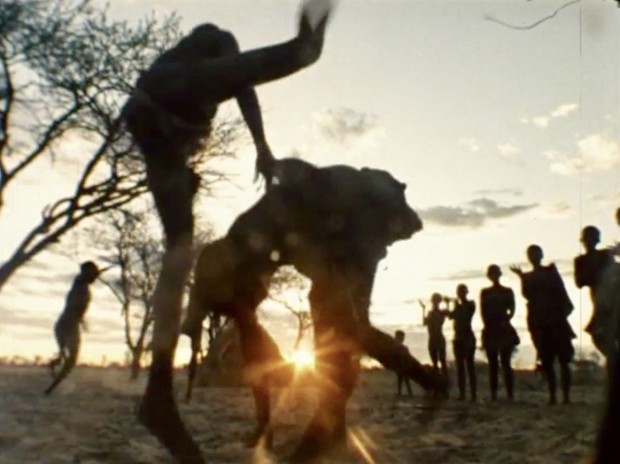 The real origins of capoeira?

The !Gwikwe Bushmen’s “ostrich dance” invites us to reflect on the original inspirations for Capoeira.

The origins of Capoeira are controversial. There has been much speculation about its roots and many claims have been made on where and how this martial art dance evolved and when and in what form it arrived in Brazil. It is generally agreed that is a Kongo-Angolan expression and likely arrived in Brazil around the 16th century with the Portuguese deportation of slaves from western and central Africa.[1] Its evolution since then into a global phenomena has largely been through Afro-Brazilian adaptation.

One theory gleaned from an old letter by ethnographer Albano de Neves e Souza, is that “N’golo is capoeira”. Albano wrote that N’golo was an acrobatic zebra dance performed by young males of the Mucope people in Angola [1]. Similarly, the famous Capoeira master Vincente Pastinha stated that his teacher, a man from Angola named Benedito, told him that Capoeira came from the N’golo dance.[1]

With this in mind, I was struck when watching the compelling 1985 documentary People of the Great Sand Face (by anthropologist Paul John Myburgh [2]). This powerful and poignant film follows the final year in the traditional life of the last free‐living !Gwikwe Bushmen of the central Kalahari Desert of Botswana, before they followed others to a government settlement and, in doing so, dissolved a remnant piece of ancient human culture.

About halfway through the film, a fascinating scene captivated my attention. I played it again and again. This ostrich dance performed by the !Gwikwe Bushmen was uncannily similar to traditional Capoeira:

Footage: From “People of the Great Sand Face” (1985). Produced and narrated by Paul John Myburgh.

So I would like to propose a theory that Capoeira is older still. We can be reasonably certain that the Bantu peoples of southern Angola (e.g. Nhaneca-Humbe and Herero ethnic groups) interacted with San Bushmen groups since they were mobile peoples inhabiting the same region. Were they influenced by such dances and integrated forms of it into their cultures? Were these dances further transmitted to and adapted by other Bantu tribes such as the Mucope? If so, this would mean that the true origins of Capoeira would be thousands of years old.

Why is this important to consider? There are at least two reasons:

We need to remember. We need to rediscover. We need to reimagine. This can only happen by continuously questioning our own assumptions, beliefs and views we hold about the world.  Understanding where we have come from – and what makes us thrive as humans in this shared dance of life – is essential for chartering where (and how) we are going.