Gazing up at the leaves of the Bodhi Tree
I felt its wisdom – a mini-epiphany
What if life’s paths are like veins on this leaf?
With one core soul path to which we should keep
A path that flows with minimal obstructions
A path that holds our original instructions

Other divergent veins we may follow
But they soon reveal promises hollow
And those paths lead us to the leaf’s edge in vain
Before tracing back to the main vein again
Only then we realize that which was amiss
And rediscover the chance to follow our bliss.

These were words that captured feelings I had while peering up at the revered Bodhi tree a few years ago during a visit to Bodh Gaya, India. It would be a cooler story if I could claim that all those poetic words had flowed through a stream of consciousness in one Buddha-style enlightened moment. They didn’t. But some of them did. And the other words fell into place over time.

But what did preface this the moment was that one particular leaf caught the winter sun and exuded a special kind of radiance. Until that point, I had been occasionally dozing off (which is quite embarrassing considering the sacredness of where I was seated and how many hundreds of pilgrims were milling around me on the cold tiled surface). 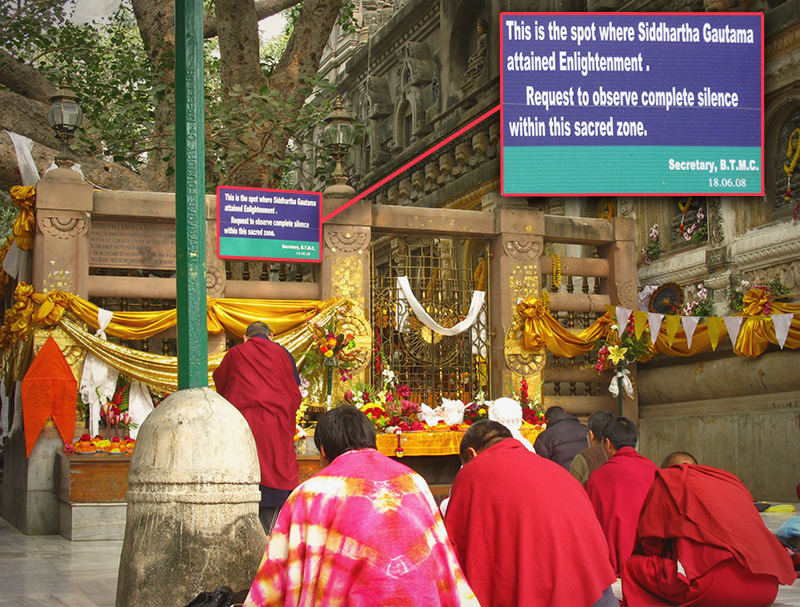 “This is the spot where Siddhartha Gautama attained Enlightenment.”
“Request to observe complete silence within this sacred zone.”

As I studied the leaf’s patterns, the idea of this main vein being a metaphor for our soul path did just ‘drop in’ in that kind of way that little revelations do. It was definitely ‘a moment’, which prompted me to take this picture of the leaf as a little reminder.

I had not really encountered the term follow your bliss until recently. I also cannot say I really warmed to it initially either, although as an early teenager I now recall being quite taken by the word ‘bliss’ for some reason (it might’ve been because I was set adrift as a closet P.M Dawn fan). I think at one stage my highly popular pretend band of which I was bassist, singer, drummer, manager and choreographer was called Bliss. I remember a mate of mine (who was actually in one of those lame real bands) thought my pretend band would be better called Matty & the Bliss Bugs. At that point, ‘bliss’ suddenly lost its appeal.

Anyway, ‘bliss’ was very much appealing to mythologist and philosopher Joseph Campbell. In the famous PBS television series between Bill Moyer and Joseph Campbell based on Campbell’s writings, ‘The Power of Myth’ this exchange can be found:

MOYERS: Do you ever have this sense when you are following your bliss, as I have at moments, of being helped by hidden hands?

CAMPBELL: All the time. It’s miraculous. I even have a superstition that has grown on me as a result of invisible hands coming all the time – namely, that if you do follow your bliss, you put yourself on a kind of track that has been there all the while, waiting for you, and the life that you ought to be living is the one you are living. When you can see that, you begin to meet people who are in the field of your bliss, and they open the doors to you. I say, follow your bliss and don’t be afraid, and doors will open where you didn’t know they were going to be.

So, my fellow bliss bugs, travel the main vein, greet the invisible hands and go forth to follow your bliss…