This was a special day.  We had set on a coastal hike along the stunning wild coast of Dwesa nature reserve. Myself and travel companions had little idea of what to expect.

Encountering a herd of white rhino about half an hour into our walk was an awesome surprise. As a fairly newly arrived foreigner in South Africa, it was my first encounter with rhino and to be on foot made it exhilarating. The sense of knowing they were aware of our presence  and wondering how they would react to us was exhilarating. 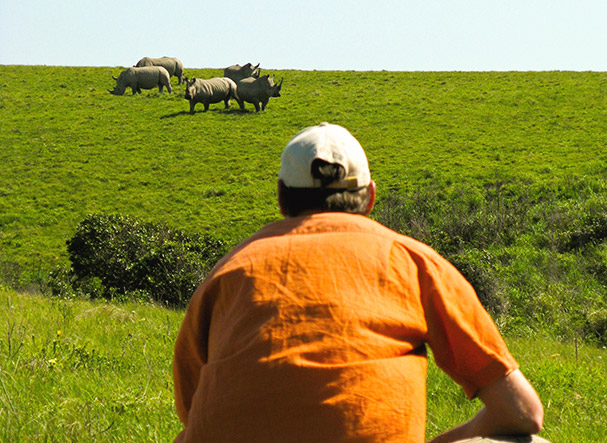 As it turned out, the rhinos were pretty chilled. The path we need to walk was exactly where the rhino were grazing and our guide gently approached them and they were content to eventually scurry off over the hill.

It was in that moment when  this experience became extra special. If the rhinos were unexpected, we could have never guessed what else was in store. As the rhino trotted back up and over the hilltop, we were momentarily stunned with the manic shake of the wildebeest heads suddenly appearing from behind the hill crest…and galloping amongst the retreating rhino.

That image will forever be etched into my recollections. It was one of those indelible moments that have a certain something illuminating them. It was a combination of the sheer surprise, the novelty and unexpectedness of seeing wildebeest and the fact that I have always been fascinated with that bizarre animal. And all of that just infused into ‘a moment’ of perceptual focus and wonder.

This story unfortunately ends on a tragic note: In 2011. I learned that every single rhino pictured in this photo was callously slaughtered as part of the rhino poaching epidemic currently hitting southern Africa.

I was devastated, especially because this time it was personal. This more than anything hammers home the realization of the implications of biodiversity loss. Over and above the intrinsic value of the rhino and their right to co-exist, what is the lost existence value and the knowledge that these creatures can and do shape memories and change lives?