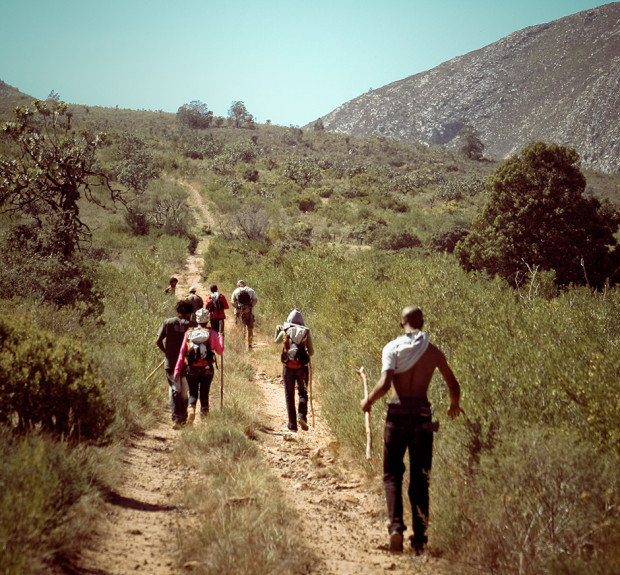 It was a week to remember for all involved. Being. Re-connecting. Discovering. And there is tentative excitement that the time spent ‘out bush’ may have catalysed something which could be forever become a legacy for the Baviaanskloof Mega-Reserve (BMR)

Nine youth and two guides embarked on the inaugural Kenchaan Community Trail in a tract of wilderness at TerraPi (in the Kouga catchment, BMR).  They departed, bonded, opened up and returned ready to take action on nature’s behalf.  For some of the group, there was a sense of destiny that this group has been ‘called’ to perform this duty (particularly since the weather cleared for their trail on the day of departure and continued raining once they returned). During their time in the wild, the participants spontaneously decided to informally form themselves as the “Baviaanskloof Nature Awareness Group.”

In the emotive words of trail participant, Noel Isaacs:

“The first day we arrived at TerraPi was a wonderful day blessed with happiness and as the whole group was setting out for the trail you can see that each and every one of us had a little seed inside of them that was waiting for someone to give it water so it could start growing.  The seed would allow us to start making a difference in nature, in their communities and in our lives. The whole week the group was making jokes, having conversations about nature and sharing their local field experience with each other.  They also learnt a lot on the trail from Ian Read, Rob Carelse and Matthew Zylstra and on the last day the group realised that they can make a difference in their communities and at local schools to reconnect people to nature.

The group decided to give themselves a name and they came up with: Baviaanskloof Nature Awareness Group. The Baviaanskloof Nature Awareness Group have noticed together that the whole trail was blessed because only the first and last days were blessed with a soft rain and we all believe that Nature allowed us to spend time with Him so we could learn how to use our experience to go out to the people and bring them also back to nature.  The Baviaanskloof Nature Awareness Group believe that nature has spoken to them so that they can protect Him and take care of Him because nature doesn’t have the power any more to defend for Himself so He wants us to help Him because in some places He is dying.  He wants our help to go out and speak to the people to teach them to look after our environment.

The Baviaankloof Nature Awareness Group feel that time is running out to make a change in people’s minds and that we as the group must go out there and speak to the people as soon as possible.  The Group can go out and talk to the people so that they can learn how to take care of nature and have a better understanding of the environment so that they themselves can go out one day to their communities and teach the next generations about beautiful Nature.

From an eyes4earth research perspective, participants were interviewed before they embarked on the trail and again after they returned to assess changes in their perceived ‘connectedness to nature’. During the trail, there was also an informal sit-down and discussion session in a stand of the invasive black wattle to find out how participants felt about the expanding presence of this Australian species across their landscape.  The feeling was generally not positive: “I cannot find the plants I’m looking for”, “I don’t see or hear birds in these areas.” … there was a desire to the black wattle removed and controlled in the landscape.

Thanks to Ian and the Kenchaan Foundation (for guiding and funding);  Rob and TerraPi for the venue and trail support; and Andy for the photography and video editing.

eyes4earth.org acts as outreach for doctoral research being led by Matthew Zylstra through the Department of Conservation Ecology & Entomology at Stellenbosch University in partnership with the TsamaHUB. Research is generously funded by the Centre of Excellence for Invasion Biology (CIB).